How Does Nutrition Impact Sleep Disorders?0

A board-certified sleep specialist and neurologist details the macro- and micronutrients that influence insomnia, sleep apnea, and other disorders.

Hippocrates, the father of medicine, recognized the importance of sleep in wellness. He noted, “Sleep and watchfulness, both of them, when immoderate, constitute disease.” He equally recognized the value of nutrition, as he also said, “Let food be thy medicine and medicine be thy food.” And so the deep roots of medicine established the vital nature of nutrition and sleep to well-being, and now emerging science shows how they are interrelated.

Sleep research scientist Teresa Arora, PhD, said, “Sleep doesn’t waste time, it’s good for the waist line.”1 But while much is known about the effects of sleep deprivation and its links to weight, what about the flipside? That is, nutrition has effects on sleep health and sleep disorders too. Researchers have accumulated a mouthful of science on how nutrition impacts sleep quality, circadian rhythms, and sleep architecture, and also plays a role in disorders such an insomnia, hypersomnia, and sleep apnea.

No conclusive studies point to one particular diet that is best for sleep. But various sources suggest that a variety of whole foods and a low-glycemic diet is helpful in improving sleep quality.

Many studies delve into nutrition specifics, such as the impact of the distribution of macronutrients—a type of food composition, such as fat, protein, or carbohydrate—and its effects on sleep.

Although simple carbohydrates may be sedating and even decrease sleep latency,7 consuming a high-glycemic load does not equate to better sleep. The surges in blood sugar that accompany a high-glycemic load turn into a subsequent drop in blood sugar 4 to 5 hours later. The body’s homeostasis responds with an increase in appetite as well as surges of norepinephrine, a stimulating neurotransmitter associated with alertness.8 This is a parallel finding as seen in the use of alcohol: the sedating properties of alcohol may shorten sleep onset, but, consumed within an hour of bedtime, it disrupts the second half of the sleep period.9 For sleep, sugar is like alcohol without the buzz! In fact, polysomnography data has shown that high-glycemic diets have more non-REM over REM sleep and higher total arousal indexes than that of low-glycemic diets.10

Fats. The role of fat in diet is controversial, in part because many studies lump all fats into one category and some studies don’t account for other macronutrient composition. In the Women’s Health Initiative study, increased fat consumption was not associated with any adverse sleep symptoms. However, a low-fat diet was associated with nonrestorative sleep and excessive daytime sleepiness.4

The high-fat ketogenic diet has been used for the treatment of epilepsy since the days of Hippocrates and in biblical times. It was also used for the treatment of diabetes before the discovery of insulin in 1921. These days the ketogenic diet is one of the most internet-searched diets and evidence emerges in its use in weight loss, cancer, and narcolepsy. Ketogenic diets have been associated with improved sleep quality and increased REM sleep,11 increased slow wave sleep,12 as well as improvement insomnia and emotional functioning.13 While high-glycemic diets are associated with fatigue, interestingly low-carbohydrate, ketogenic diets have been found to be effective in improving symptoms of narcolepsy.14

Micronutrients are traditionally thought of as vitamins and minerals, but they also include individual metabolites, amino acids, and fatty acids. They are required to ensure normal metabolism and physical well-being, and they influence sleep quality and circadian factors.

B Vitamins. Vitamin B1 (thiamin) has been shown to reduce daytime sleep time, improve sleep patterns, and increase activity.15 B9 (folate) is one of several nutrients implicated in improving mood and sleep.16 B6 (pyridoxine) may improve dream recall.17 B12 (cobalamin) influences circadian rhythms.18, 19 One study found that people with insomnia consumed significantly lesser quantities of B vitamins as compared to normal sleepers.20

Amino Acids and Metabolites. The amino acid asparagine was first isolated in 1806 from asparagus juice, in which it is abundant (hence its name), and has been found to have an effect on fatigue.22, 23 Mental and physical fatigue also coincides with reduced levels of glutamine,24 serine,25 and carnitine.26, 27

Common sources of these amino acids and metabolites include meats, poultry, eggs, and fish. Plant-based sources of asparagine include asparagus, legumes, nuts and seeds, and soy.21

Magnesium and zinc can be found together in dark leafy greens, nuts and seeds, legumes, whole grains, and…dark chocolate! Zinc can additionally be found in meats and shellfish, and magnesium can also be found in avocados.21

Selenium’s role as a potent antioxidant may reduce the oxidative stress seen in sleep apnea patients, write co-authors on the micronutrient’s 200th discovery anniversary, noting that 1 in 7 people do not consume the recommend daily intake.37

Sleep apnea is linked with vitamin D deficiency. The worse the apnea, the more severe the deficiency.38 Low vitamin D has also been linked to worsening of sleep apnea’s negative effect on heart disease risk.39

Vitamin C is well known to be found in citrus, but cruciferous vegetables such as broccoli, Brussels sprouts, and cauliflower are also great sources, as are dark leafy greens. Dark leafy greens are also a great source of vitamins E and A. Vitamin A is also found in carrots. Brazil nuts are a robust source of selenium. Vitamin D is traditionally obtained through sunlight; however it can also be found in fatty fish such as salmon and mackerel, as well as egg yolks and beef liver.21

Fatty Acids. When I run micronutrient profiles on my insomnia patients, oleic acid deficiency is a common finding. This fatty acid is a precursor of oleamide, which regulates our drive for sleep and tends to accumulate in the spinal fluid of sleep-deprived animals (to induce sleep).42 In a study of depressed patients, negative correlations were discovered between the degree of sleep disturbances and fatty acid concentrations, with palmitoleic and oleic acids seeming to be “especially important for sleep disorders,” according to the authors.43

Oleic acid is a major constituent of plant oils such as olive and almond oils.21

Consumption of fish, a source of omega-3 fatty acids, has also been associated with improved sleep. One study found fish consumption has a positive impact on sleep in general and also on daily functioning, which may be related to vitamin D status and heart rate variability.44

Phytonutrients. “Phyto” is from the Greek word for plant, and phytonutrients refer to nutrients made by plants. Higher daily intake of plant-estrogen isoflavone has been positively associated with optimal sleep duration and quality.45 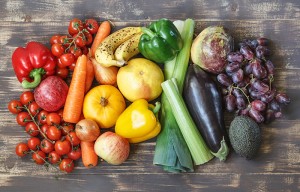 Foods with Melatonin. Wakefulness-regulating hormone melatonin exists in plant-based foods including tomatoes, walnuts, barley, strawberries, olive oil, and wine. Synthesis requires tryptophan as a precursor, as well as a cascade of enzyme-based reactions. Several vitamins and minerals act as co-factors and activators.46 Tart cherry juice concentrate ups melatonin and improves sleep duration and quality in healthy men and women, found a randomized double-blind study and “might be of benefit in managing disturbed sleep,” the authors state.47 Along those lines, a pilot study found that tart cherry juice blend CherryPharm reduced insomnia severity in older adults, though not as much as hypnotics or cognitive behavioral therapy.48

The Importance of Food Diversity

It does not appear that one isolated vitamin, mineral, or macronutrient plays the definitive role in optimizing sleep, but rather many play together as an orchestra. This adds complexity when studying one nutrient alone—a single violin doesn’t constitute an orchestra.

One study shows adherence to a Mediterranean diet to be linked with lower risk of changes in sleep duration and with better sleep quality in older adults.49 This diet is not associated with an increase of any one particular micro- or macronutrient. It is associated with low-glycemic eating, minimally processed whole fresh foods, phytonutrients, moderate protein (emphasizing fish over red meat), whole grains, and healthy fats (such as olive oil, nuts, and seeds). This variety of food intake better supplies appropriate distribution of nutrients for sleep.

The evaluation of sleep disorders commonly requires a sleep diary. Equally clinicians may want to have their patients keep a food journal to better understand how nutrition influences sleep.

Jose Colon, MD, MPH, is dual board-certified in sleep medicine and neurology, with special qualifications in child neurology. He is a member of the Institute for Functional Medicine (IFM) and American College of Lifestyle Medicine (ACLM). He is also a founding member of the Society of Behavioral Sleep Medicine (SBSM) and is a member of the American Society of Clinical Hypnosis (ASCH). Colon is an award-winning author of for books for sleep, children’s mindfulness and sleep, and infant sleep.