The Agony and Ecstasy of Room Sharing for Siblings0 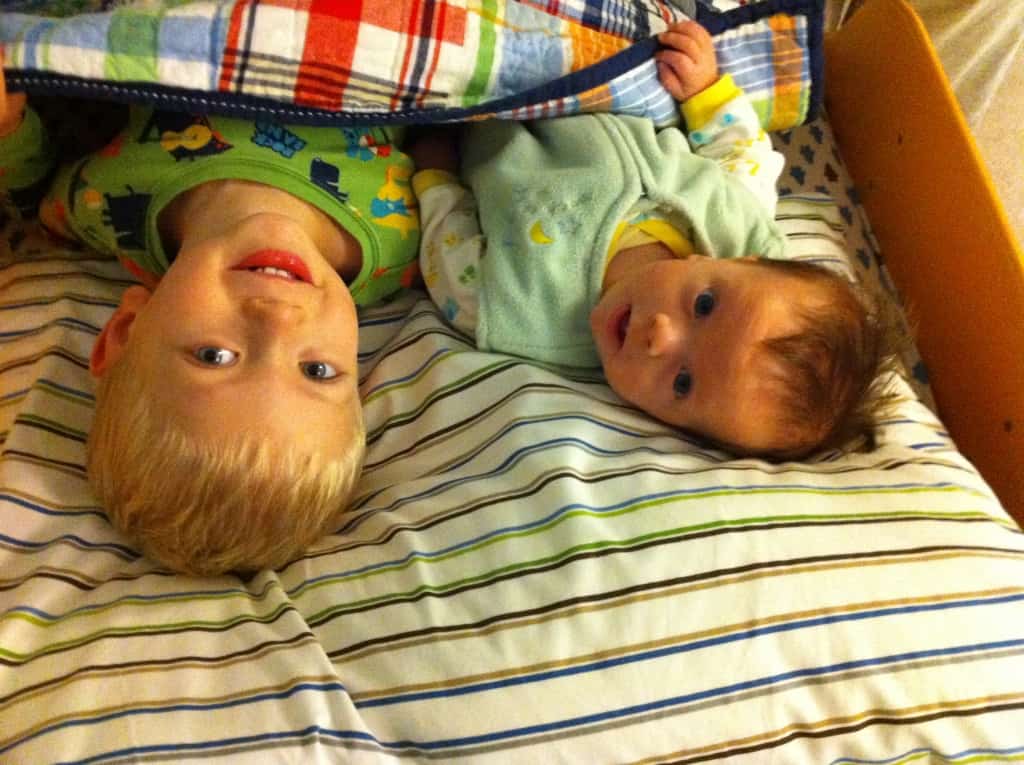 Room sharing for siblings presents special challenges for parents and families when it comes to getting a good night of sleep. I wrote an article in the New York Times on the promise and pitfalls of room sharing. To help me with this, I asked subscribers to my mailing list to tell me about their experiences.

I’m fortunate to have some of the smartest readers on the internet. I asked my readers about how room sharing affects their family’s routines at night— the good, the bad, and the ugly. This information informed the article I wrote.

Benefits and joys of room sharing

My daughter age 2.5 and son age 5 share a room. This began about 8 months ago after a sleep trainer recommended it might help with my daughter’s sleep challenges. She would scream at bedtime and wake up in the middle of the night for up to 3 hours. The room sharing worked like a charm!

Dr. Kara Garcia, a pediatrician in Pennsylvania, takes about how helpful this has been with her children, now ages 5 and 7.5 years old:

I put my kids in the same room once my younger one was in a bed, so at about 2 yo. They were in separate rooms before that.

My eldest has always been a “nervous” sleeper, had a tough time getting to bed alone, but ever since we put them together he has been great at bedtime. My youngest is very flexible and after she got over the fact that she didn’t “have her own special room,” she likes being able to sleep in a bunkbed with her older brother.

I talk to patients about this a lot – each kid has a different sleep style and you have more success if they have “complementary sleep styles,” so to speak.

WHAT’S GOOD: kids with separation anxiety thrive with someone else in the room, they are good buddies

Children also tend to wake each other up less than you expect, although the mornings remain a challenge, as Dr. Garcia notes:

Middle of the night wakings rarely result in both being awake. Neither is a light sleeper, so maybe that’s why, but I feel like even with other families, this is an overblown concern.

Sometimes the first one awake will wake the other one in the am, and that can be a bummer. They usually will stop doing it if we ask them to stay quiet in the am and just come over to our room.

At night, it’s not a real issue. Even when one wakes up crying from a nightmare, the other one stays asleep. While we were night-potty training them and would bring take them to pee in the middle of the night, they didn’t wake each other up (or wake up themselves). Nap time, when sleep is lighter, is more of a challenge. It is much harder for one to get up without waking up the other.

Rachel notes that sharing a room is economically and environmentally sound:

The best thing about kids sharing a room is saving space. We had to give up our home office space to move the babies into a separate bedroom from their sister, which matters because we both work from home often. We don’t have enough bedrooms to give each child their own room. It also feels more environmentally friendly to share a smaller home as a family, rather than heating and cooling a 4-bedroom house.

It can even help on weekend mornings:

Our twins sometimes are content to babble at each other when they wake up in the morning, rather than immediately crying for us. This helps us doze in the mornings sometimes.

One thing that I’ve found helpful is having an OK-to-wake clock (a stoplight that is red during sleep hours and turns green at wake-up time). We have used this to establish the norm that if the light is red, they can’t make noise. There are books and stuffed animals in the room but no toys that make too much noise to keep them engaged and from waking each other up.

Room Sharing Challenges and How to Negotiate Them

It can be really challenging if children have an incompatible bedtime. Rachel writes more about this:

Our twins used to share with their 3-year-old sister, but it was a mess. We’d put the twins down at 7:30 in pack-n-plays in our home office so we could do bedtime with the 3-year-old in the kids’ bedroom, then we’d have to move the babies to their cribs after their big sister was asleep. She would then wake up in the middle of the night and come into our bed almost every night. The day we gave the babies their own bedroom, she started sleeping through the night in her own bed.

We have a challenge that both kids need to go to bed at different times. My daughter still naps – at daycare they let kids nap for over 2 hours until past 3 pm which means my daughter won’t fall asleep until 9 pm. But my son needs to sleep at 8 pm. This is difficult. And i haven’t yet found a workable solution. If i put my daughter to bed too early she just screams so my son can’t fall asleep.

EV writes about the challenge when two children have different sensory preferences for falling asleep. Some children like music or sound; others require absolute silence.

One of my children falls asleep very easily (7) The other one (9) tosses and turns, wants to listen to a story on the radio etc. This makes it harder for the younger one to fall asleep and she complains.

My son, 7, shares a room with my daughter, 4. They both go to bed at 7:30pm though my son looks forward to going to bed (he’s always been very good about going to bed) and my daughter would rather stay up. My daughter will be disruptive by either coming out several times or doing silly things/trying to get a rise out of her brother. This creates a problem for my son who desperately wants to go to sleep and for us who want to start our evening sans kids. While the 4 yr old’s behavior has actually been better this past week, when she is disruptive we move my son into our room to go to sleep and later move him back into bed once they are both asleep. This lets him go to sleep and hope incentivizes her to stay in bed.

Sometimes, one child may be freaking out:

The challenge is if one is having a melt-down and the other one is ready to go to sleep. We have at times put one to bed and then let the other get through their melt-down outside the room before taking them in to bed, but it’s hard for this not to be disruptive to the one who is already in bed.

Sometimes you need to make some compromises with bedtime. Sara, a mother of three writes about the challenges of having ten month old twins and a 3 yo boy in a two bedroom apartment.

The twins go to sleep around 7:45 or 8, and E has some play time with us then reads books in the living room and goes to bed around 8:45. (If he goes to bed earlier than that he’s up around 5 am.) His bedtime routine isn’t ideal – one of us has to lay down with him, though we try to leave before he’s all the way asleep

The one challenge now is that if one of us is alone with all three kids we definitely have to use screens to keep the older boy occupied and quiet during the twins’ bedtime routine.

Bedtime stories can be a sticking point:

I thought we’d be able to read them the same bedtime stories, but they are not really interested in the same stories anymore, so that’s not as streamlined as I’d like!

The bunk bed separation is a challenge for our story time routine. The first week or so we would lay down on the top bunk and read + fall asleep there. It was disruptive to then move my sleeping son to his bed. I tried standing next to the bed while both of them were on the top bunk but that was awkward. Last couple of days we’ve been doing story time on the bottom bunk – it helped the younger one get the comfort of being in his own bed + spend a few extra minutes laying next to his sister (which he actually loves to do, but which I cannot allow them to do because his sister’s movements throughout the night wakes him). This setup is lesser of an issue for the older one, who happily moves back up to her top bunk as soon as she gets the satisfaction of reading enough books.

If you introduce a baby into your older child’s room, doing so mindfully can be really helpful. Sara describes the way she handled this:

My 3-year-old son and 10-month-old twins have been sharing a large bedroom in our two-bedroom apartment since the twins were about six months, right around my son’s third birthday. It had been the adult bedroom, which we were sharing with the twins. We moved them from arm’s reach co-sleepers to cribs at around 5 months and did some night weaning and CIO sleep-training before we moved the toddler in with them. (They went to sleep relatively easily and had been sleeping through the night before 4 months, but both started waking up and eating at least once a night after that regression).

I’ve been surprised so far at how well it’s gone. We’re lucky that our older son, E, is very into being a big brother and not particularly jealous of the twins. We bought him a new twin bed (the IKEA kind that can turn into a low platform bed when he’s a little older) and made a big deal about him picking out new bedding for his special bed.

Sarah Christian, a mother and sleep consultant in Pennsylvania, talks about the difficulty with one of her children when the family took in a foster child. The youngest boy, who is 4, had to move in with his older siblings. She talks about how they negotiated this transition :

After trying in every way we could think of to reassure him that he was still just as loved and that sleeping still was important, we decided to look for ways to take the fight out of bedtime. For a few months, we ended up letting him sleep on a mat on the floor in our bedroom. It let him find a way to still be close to us, while still keeping the boundary of letting him know that he did need to go to sleep at bedtime. Sometimes he would start the night in his bed in the room he now shared with his big brother and sister, then in the middle of the night he would tiptoe into our room to sleep on the floor. As long as he was quiet and didn’t wake us, we let him do his thing.

After a time, he became more comfortable with the new routines of life with four kids, and he started staying in his bed all night again. We would offer some encouragement/praise in the mornings when he did, and remind him of how good it felt to sleep all night in his bed and wake up feeling well-rested.

Tell us about your experiences with room sharing

Thanks to everyone who wrote in— there were so many great responses that I could not include them all. If your children share a room, let me what works and what doesn’t.

The post The Agony and Ecstasy of Room Sharing for Siblings appeared first on Craig Canapari, MD.