Sometimes, your best strategy for dealing with your child’s annoying behaviors is to ignore them. Here are three reasons why.

Recently, my younger boy has developed the habit of leaving his bed about twenty minutes after bedtime, complaining about the heat (we keep it around 70 degrees). He then climbs into the guest bedroom, wraps himself in multiple blankets, and promptly goes to sleep.

My wife is not thrilled with this turn of events. Understandably, she has a preference that each child confine his chaos to his own room. (I’m a bit annoyed, but also intrigued to see where this takes us— more on this below).

Nobody is more bothered about this, however, than my older son C. “He should stay in his own room at night!”, he protests. “It upsets Mommy!” (This is probably a slight exaggeration).

I get it. It is a big flex by baby brother to essentially have two rooms and sleep in a queen sized bed with nice linens— a big step up from his $50 IKEA mattress.

My older boy is a lot like me, and not just because we are oldest siblings who resent the “special treatment” that younger siblings get. C is a stickler for the truth, and for what as right. Ever since early childhood he will not back down once he digs his heels in. (If he can find a way to make a living arguing, he will be very successful).

I’m trying to teach him to let some things go, and that doing so can actually benefit him as well. Here are three reasons why sometimes ignoring behavior you don’t like is the best way to address it. But first, you have to decide which behaviors to deal with, and which to ignore.

What Behaviors Should You Ignore

This is important. If you think perhaps you should let something go it needs to

So here are three reasons why you should just let some stuff go.

1. It’s better to be kind than right, most of the time.

Many times in my life, I’ve found myself in conflict— with my parents, my brother, and now my wife and kids— in situations where I was convinced that I was in the right.

(It’s funny that I even referenced this in my high school senior photo, even though I was often a big pain in the ass if you ask my parents).

Some of the time, I am right, but it is seldom worth getting in an argument or hurting the feelings of those around me.

There are times in this life when you I have to communicate your point of view— such as when my child is playing too close to a busy road, or when the parent of a patient is afraid to try a potentially life saving medication. However, there are often situations when others make decisions differently than I would. And you know what, I’m learning to be OK with letting these things go.

Last night, I tried to tell C this as he was obviously worked up over the injustice of his brother’s forays to the guest room. “Sometimes, it’s better to be kind than right,” I told him.

He didn’t really get my point. “But I am right,” he said.

Even when I gave him some recent examples where I was too hard on him about some persistent points of contention (the way he perches like a bird on his chair at dinner, for example).

I hope he will think about what I told him. Because it has taken me a long time to figure it out. I’m still figuring out. One thing that has helped me with this has been learning to meditate (which I’ve now been doing for just about 700 days in a row).

2. You save your energy and focus for the things that matter

As parents, we are challenged by our children, often many times per day. I encourage you to not always rise to these provocations. As annoying as your children can be (and believe me, mine can be very annoying) responding to every fart, funny voice, or spilled glass of milk will deplete both your energy and authority with your child. Note that I still struggle with this and frequently use my temper over trivialities such as, say, my son dropping his ice cream cone on the floor within 30 seconds of getting it.

This is basically pure survival. If you squander your energy and authority with all of these little events, each day is a ceaseless set of tiny frictions that will wear you down. Your kids will also stop paying attention if you nitpick every little thing they say or do— the child based equivalent of alarm fatigue.

How do you do this? I’m still working on it myself. Self care is really important— getting enough sleep, exercise, and time without children help. Personally, I have found that my meditation practice has helped me be less reactive 1.

Both in this post on habits and in my book (affiliate link), I talk at length about how understanding the mechanics of habit psychology can help you be a better and more effective parent.

Behavior: Goes to guest room bed, whines about being “too hot to sleep”

Consequence: Luxuriates in queen size bed and linens, immediately falls asleep blissfully in room at same temperature while he listens to his brother kvetch about the injustice of it all

As parents (and big brothers) we have the power to drive the habit loop by giving positive or negative attention. This ensures that the habit will continue— to stick with a brother themed analogy, I remember torturing my little brother by teasing him as a child, until he would lose his temper and yell at me, or cry.

Behavior: I would righteously tease him with hilarious jokes, or sometimes just pants him

Reward: The sweet sweet tears of his rage and impotence

Here’s the tricky thing about “rewards”— negative attention (yelling, criticizing, storming about) is almost as powerful as positive attention (praise, hugs) in reinforcing behaviors. Often, your child’s annoying behavior is a cry for attention— this is why kids are more likely to act out if you are on a work call or trying to get caught up on email.

The classic sleep example of ignoring behaviors you don’t like is extinction, or cry it out sleep training. This involves ignoring your child until he falls asleep. In behavioral terms, this strategy will also work for silly voices, burps used as punctuation, and questions asked a hundred times on a road trip such as, “Are we there yet?”

My point to my older son here is that getting shouty and critical will actually make his brother keep doing the thing that is bugging you.

I suprisingly here this complaint a lot from parents— that their children go and sleep elsewhere during the night. It’s hard to address this— and perhaps not necessary if your child is sleeping well (falling asleep without difficulty, being safe throughout the night, waking up well rested in the morning).

On the other hand, if sleep is really a problem, then I would work first on a bedtime based intervention to encourage independent sleep, then perhaps a system to reward staying in the room. These interventions are easier than you think, and described in detail in my book.

Tell me your thoughts

Does your child wander the house at night? What have you tried to address this? Alternatively, I’d love to hear your strategies for managing your own (often justified) anger if your kids are doing silly kid stuff. Leave a comment below. 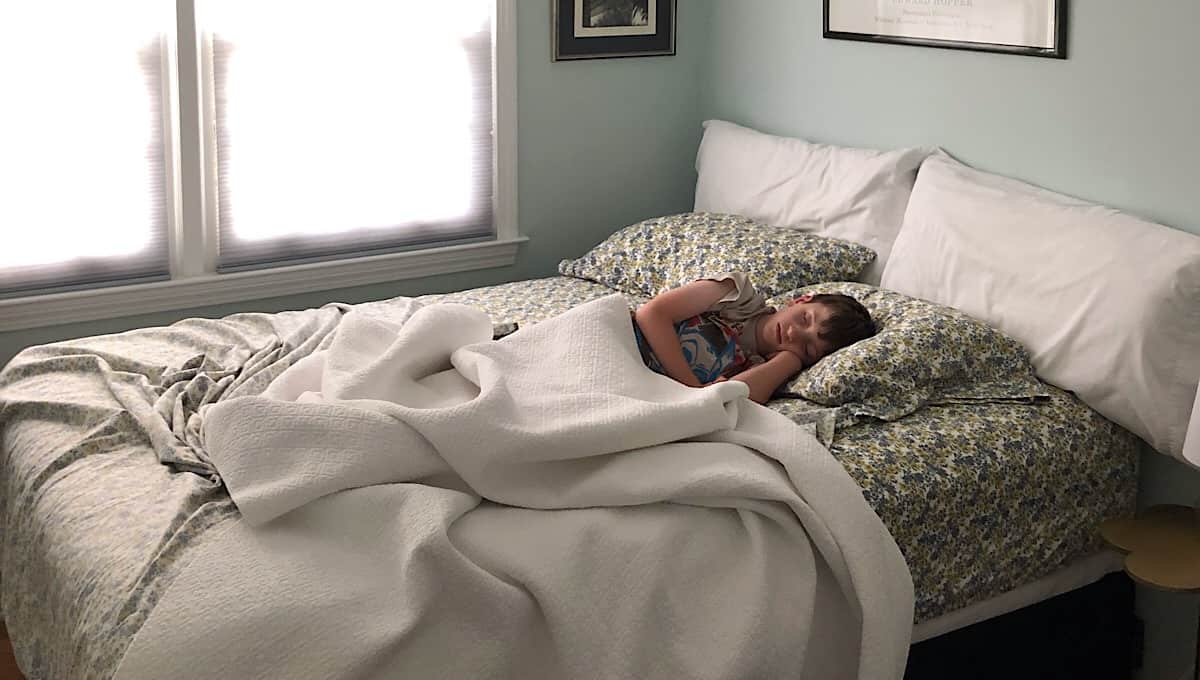